skip to main | skip to sidebar

What is a Trail Nerd?

A trail nerd is a runner who loathes the pavement, does not let a little bad weather stop them, does not whine, and is always ready to help a fellow trail runner. They originate from Kansas City, then like little seeds, propogate in other areas. Wanna be a nerd? Just join one of our group runs.

Magical Time at Dogwood (Or Third Time's a Charm) 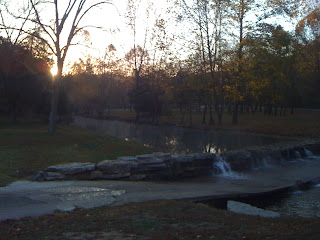 They say the third time is a charm. The third running of the Dogwood Canyon 25K/50K race, which is part of the Outdoor Fitness Festival sponsored by Bass Pro Shops went off this year on October 31, 2010 at 8 am in near perfect conditions. Fall in the Ozarks just does not get any better. Race day started out nice and cool 44F and warmed up to 73F later in the afternoon. A nice fall breeze kept things from getting too warm. Trees were in the process of turning (a bit late this year) and several spectators observed bald eagles in the canyon.

With almost 300 racers, this was the largest turnout for this event. The morning started with a minor emergency. 'No TP in the men's' room!' crackled over the race radio. That's not the way to start a race... With that taken care of, the participants gathered under the large log structure pavilion, with two huge open hearth fire places roaring with fires to hear the pre-race announcements before moving to the stone bridge starting line to hear the Lennon brothers [need names] perform the national anthem. They also participated in the race! 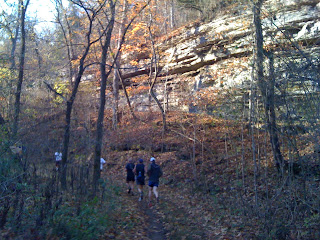 And with a the countdown, they were off! The course started out (as usual) with a few flat miles along Little Indian Creek, crossing the creek 11 times. With one good ascent thrown in early (about 2 miles in) for good measure and to get the legs warmed up. Then the hills began. They are short, but steep and un-relenting. The 25K is one big loop and the 50K is same course in reverse, with an extra 'little' loop. One racer was overheard late in the 50K race 'Are they friggin' kidding me!!?' Top finishers all agreed this is one of the toughest courses they have ever run.

The race is run primarily on 100 year old logging roads on a 2000+ acre private property that have been opened up specifically for this race. Even though Dogwood Canyon is a private nature park, open to the public, The general public is not allowed access to these roads and trails except during the race. At one point the road gives way to a ravine that washed the road out many years ago. The racers have to scramble down the rocks, into 'The ravine' and back out. This year the ravine was filled with 'Dueling Banjo' music. 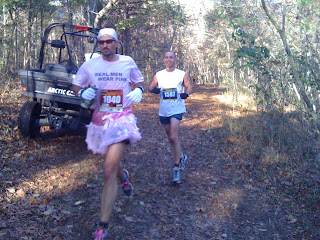 Since it was Halloween, there was also a Halloween contest - and there was everything from 'The Lady Bugs' to 'Wonder Woman', 'Twister Lady', and 'Tutu Man'. Awards and prizes were given to participants who sported costumes on the race course.

The day ended near perfect with all racers completing the course prior to the 9:30 cutoff time, and with only 2 DNFs. The top 250K finishers crossed stride in stride at even after missing a turn, and having to add about 100 yards to make up the loop they missed, and third place was only about 30 seconds behind.

Thanks to Bass Pro Shops, Dogwood Canyon and all the volunteers from Ozark Greenways - without whom this race would simply not be possible. Special shout out to John Montgomery and Shawn Gates - you guys ROCK! 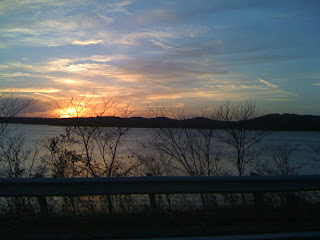 One last call on the radio for the day was 'Chad, Uh, I'm not sure how to say this, but uh, the wheel fell of the Prowler'. I had literally driven the wheels off of an Arctic Cat Prowler that was used for race radio and transportation on-course. With that, we were were promptly picked up in the Bass Pro corporate logo-ed FJ Cruiser, back to race HQ to get a jeep to go take down the last aid station. And on my way home that evening, witnessed the most gorgeous sunset across Tablerock lake I had ever seen. A near perfect close to a near perfect weekend. Will we see you next year? 'Juice'
Simple, strategic, dedicated, and love to do anything that involves being outdoors.